Recap: The gang recreates Michael's "Good Place" from Season 1. They're tasked with being able to reform four new humans at the Good Place. The Bad Place Demons get to choose who the 4 humans are, and they've already chosen two: John, a gossip columnist who frequently wrote about Tahani, and Simone, Chidi's ex. Chidi doesn't think he can hold himself together around Simone, so he asks for his memory to be wiped.

The season opens with Eleanor introducing Chidi to the good place, and you already can't help but feel for her. You can see the awe in her face as she watches Chidi get excited by what the good place has to offer. For a moment, it seems like she's holding up well considering the man she loves doesn't remember her. But towards the end of the tour, he asks for her name, and she's understandably disappointed. We see a hint of the old Eleanor when Chidi promises he won't forget her name again and she quickly retorts, "Well, ya might!".

Later when Eleanor reconvenes with the rest of the team, Michael, seeing that team morale was down, gives the them a passionate speech, reformed-demon style: praising their talents and their abilities to work together contrasted with a direct reminder that all of humanity will be doomed if they fail. Throughout the speech, it cuts to Shawn, who's giving a similar speech to the demons in a hilarious juxtaposition between "good" and "evil". The scene ends with the bad place singing their "official" song -- the Kars4Kids Jingle.

The next resident of the new good place is Linda, an elderly woman who appears, at worst, apathetic. She's clearly uninterested in where she is or what it means. In an attempt to get Linda engaged, Michael and Eleanor call for Janet and tell Linda she can ask for absolutely anything -- but all she wants is a peppermint. The final resident is Brent Norwalk. Immediately introduced as a sex offender, he goes on to claim he's definitely not racist by bringing up the one black person he knows. He may prove to be the hardest to reform.

Now that they have all the residents, step one of their plan is to just get to know the new residents. They already know Simone from the study on Earth, so they're pretty optimistic knowing they just need to get to know three more people. But, of course things simply can't be that easy; Simone has decided that the Good Place is actually just a figment of her imagination, throwing a wrench in their plan. To Eleanor's dismay, the gang decides that it'd be best for them to introduce Chidi and Simone, so he can convince her that she's actually in the afterlife.

"I'm in a coma and none of this is real" - Simone Garnett, PhD, singing while wearing a cheese hat.

However, Simone scares Chidi off by immediately bursting into Third Blind Eye's Semi-Charmed Life in an attempt to wake herself up.

Frustrated by their lack of progress with her, they try to focus on their "easiest" target so far -- Linda. Linda, unfortunately, remains apathetic, still only asking Janet for peppermints, and uninterested in flying more than 1 foot off the ground during a community flying activity. Michael and Eleanor try to get her engaged with bird watching and pushing her to ask for literally anything else. Shockingly, she instead goes on a punching spree, punching Eleanor, Michael, and a few other fake-residents before flying off and terrorizing the other flying fake-residents. It turns out, the bad place never picked a fourth resident -- Linda was actually a demon. As a result, the judge decides that Chidi will be the fourth resident instead. 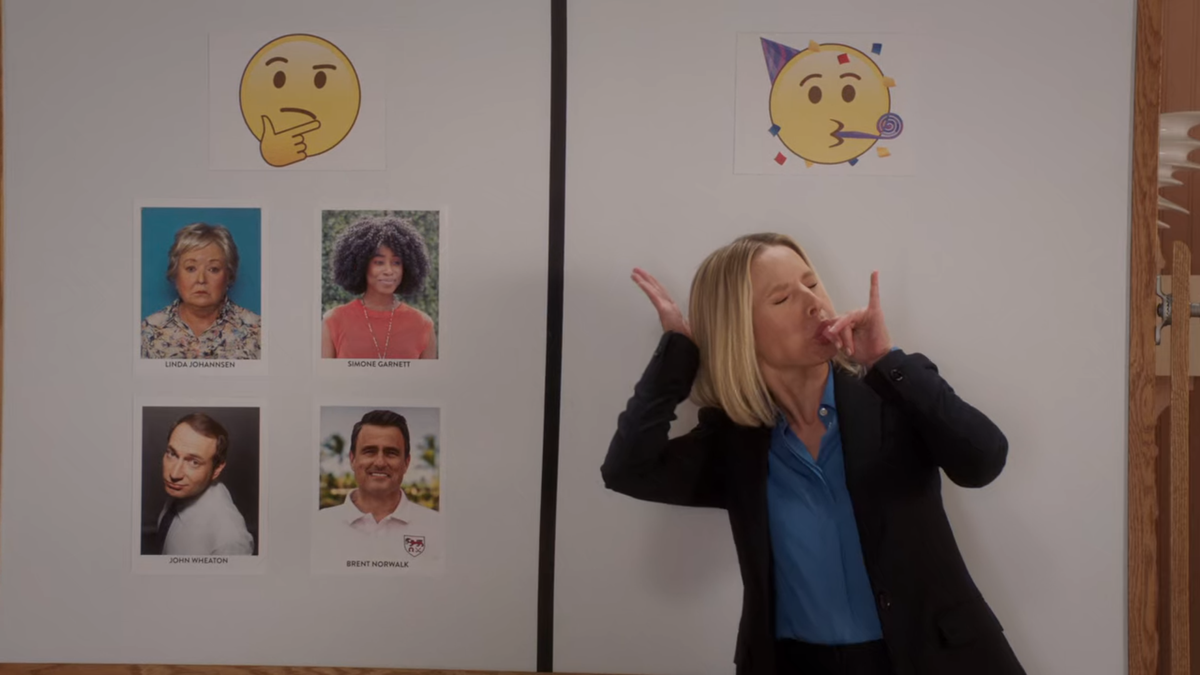 Eleanor as a leader.

Part Two opens with Eleanor wondering why the bad place would send in something as obvious as Linda to mess with the experiment. It gets quickly glossed over, but it will likely foreshadow that the bad place had a bigger plan.

The gang tries to focus on making Brent understand that he doesn't belong in the good place, but as he talks more, it becomes increasingly apparent that he genuinely belives he belongs there. The next morning, Eleanor and Michael cook up a throwback to one of Eleanor's first few days in the "original" good place, a storm of utter chaos directly related to Brent, hoping that it will make him realize he doesn't belong in the good place, and his presence is making everything go crazy, like a similar event did for Eleanor in season one. Instead, Brent declares his realization that he's indeed not supposed to be in the good place, he's supposed to be in the "Best Place".

After yet another botched idea of Eleanor's, when Eleanor isn't present, Tahani suggests that Eleanor shouldn't be the leader of the group anymore. Eleanor unfortunately overhears and decides to quit. Later, Michael finds her and encourages to come back, but Eleanor is frustrated and lost, asking, "How can I save all of humanity? I'm just a girl from Arizona." and reminding him that she didn't lead an exemplary life on Earth herself. After a pep-talk from Michael, Eleanor comes up with a new idea for Brent -- tell him he has to be good to get into the "Best Place". Michael and Eleanor leave him with hope that as he continues to do good for points, he'll become a better person out of habit, just as she did.

Finally, Eleanor decides to focus on Chidi and Simone. She tells Chidi that he and Simone are soulmates -- a strategy Michael used in the first season to torture Eleanor and Chidi but ultimately ended up backfiring. She explains that he might be able to get through to her. This plan, too, appears successful for now -- Chidi manages to convince Simone that she shouldn't act like a jerk just because she thinks none of this is real. Their relationship will be interesting to watch in the Good Place, and if it's anything like the relationship they had on Earth, they'll be making each other better people in no time.

The first two episodes of this final season were eventful openers with plenty of proof that our main characters have come quite far. We see Jason attempt to be the better man with Derek, their strange interactions providing comic relief between tense scenes. We see Eleanor, stepping up as leader and being emotionally mature enough to do what's best for the experiment (and all of humanity). This season's off to a strong start; with just 13 more episodes to go, it'll be interesting to see how it all wraps up.